Google’s Broad Core Algorithm Update – EVERYTHING You Must Know 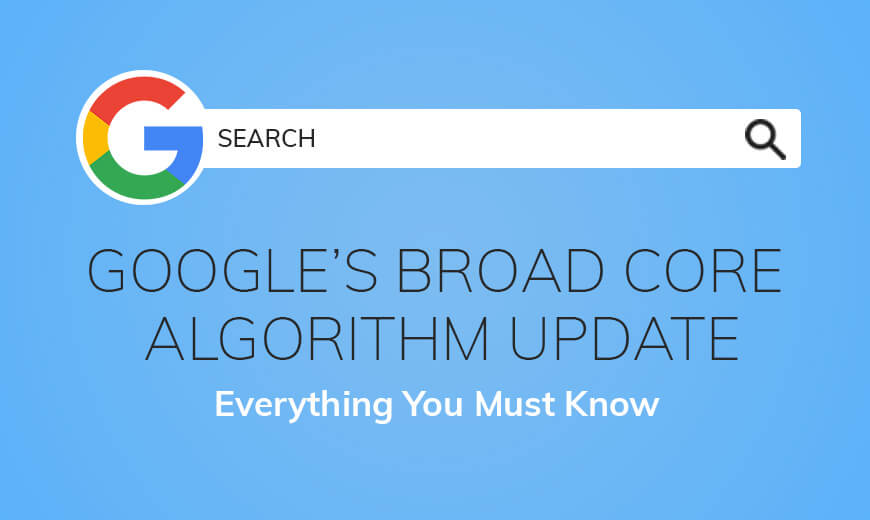 Google’s Broad Core Algorithm Update – EVERYTHING You Must Know

“This week we released a broad core algorithm update, as we do several times per year. Our guidance about such updates remains the same as in March,” Google tweeted on August 1, 2018. And just like that, the search engine jolted the SEO community back on its feet… again.

It’s no secret that Google makes changes in its algorithm hundreds of times every year. Sometimes multiple times a day. But the majority of these updates are so small and negligent that very few really stress over them.

However, the latest announcement is no one such small updates. It’s big. Else it wouldn’t have warranted an official statement in the first place. Sadly, nobody really knows what ‘broad core algorithm update’ is. It can literally be anything!

What is the broad core algorithm update?

Unlike Panda, Penguin, Fred and more, these updates are relatively generic but critically important. They aren’t implemented to solve any one particular problem with the search result.

Broad core algorithm update doesn’t target any one problem; it isn’t a solution to anything specific. Rather, as is suggestive by its name, it’s a widespread change that will broadly affect any or all of Google’s over 200 ranking factors.

Another term in the name to focus on is ‘core’. Although broad and generic, the update happens in the core or main search engine framework, which, unsurprisingly, will have a significant impact on SERP.

In short, no one can really make out exactly how Google’s August 1 algorithm update will impact the SEO world. So, there’s basically nothing much you can do following this announcement. All you can do is hope that you’re still in good books of this search giant.

That being said though, when seen inline with the past official tweets of Google, you shouldn’t be much worrying about getting penalized.

In March this year, Google said, “Last week, we released a broad core algorithm update. We do these routinely several times per year…. As with any update, some sites may note drops or gains. There’s nothing wrong with pages that may now perform less well. Instead, it’s that changes to our systems are benefiting pages that were previously under-rewarded…. There’s no “fix” for pages that
may perform less well other than to remain focused on building great content. Over time, it may be that your content may rise relative to other pages.”

(These are official tweets from Google’s @searchliaison. Check it out here.)

Meaning, in case, if you see your website performing badly following the August 1 broad core algorithm update, it doesn’t mean you’ve been penalized. It simply means your competitors are more deserving to rank higher than you. And if you see an improvement in your metrics, you’re so much better than what you’ve got till now.

What to do now?

Again, there’s very less you can do to minimize the impact of the latest broad core algorithm update (if any). Given, assumingly, the update can impact nearly any and every of Google’s ranking factors, you have to run back to the basics. Here are 6 things you can do now:

These are 6 cliched but important things you should do to rank higher on Google—to tackle any of its algorithm updates swiftly. For now, keep an eye on your metrics. If you measure any change, re-align your SEO strategies accordingly. Broad core algorithm update is a big development. But there’s nothing much you can do about it.

Mobile App Security: How Important it is Post-Cambridge Analytica Era?

Is WordPress the right CMS for your business?